Though we argue with our friends at Memorial Church at Harvard, we believe the University Church at Yale was the first congregation on an American college campus (though our illustrious sister institution had the first Christian services).  Founded in 1757, Yale separated from the established Congregational church of New Haven (now Center Church on the Green) to form its own Congregational Church on campus for students and faculty called the Church of Christ in Yale. 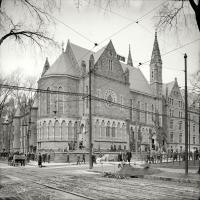 What Christian church did Yale’s founders belong to?

The founders were Congregationalists by church government – that is, they believed that each church is independent and should not be governed by bishops or synods.  They were Puritans by history – radical Protestants who sought to “purify” what they believed was a corrupt English Anglican church, and who eventually came to North America to be able to practice their faith freely.  Congregationalism was the faith established by law in Connecticut (until the 19th century).  Yale was a vital center for Christian life in New England for a century:  producing some of the most-read theologians and church leaders, and was a center of the Great Awakening.   Jonathan Edwards, Class of 1720, Timothy Dwight IV, Class of 1769, and many other Congregational leaders passed through the Church of Christ in Yale.

How did the church change over the years?

The Church of Christ in Yale changed much as Yale changed.   Pictures of the Student Deacons from the nineteen-twenties show fifteen or twenty young white men in suits (and sepia-tone).  In 1927, compulsory worship was abolished, and chapel became voluntary.  At the same time, leadership of the church passed from the Professor of Divinity or the President, to a University Chaplain.  Over the years, Yale also became less Congregational – welcoming students of many Protestant denominations, and eventually, less Protestant, slowly opening to Jewish and Roman Catholic students, after years of quotas or exclusion. 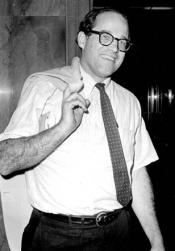 From the 1920’s to the 1970’s, Yale had two chaplains who captured the spirit of the institution and the spirit of the times:  Sidney Lovett, Class of 1913, and William Sloane Coffin, Class of 1947.   “Uncle Sid” Lovett was Chaplain and Pastor from 1932 to 1958.  Lovett was a beloved figure on campus – Professor of Biblical Literature, Master of Pierson College, collector of old hats, sports fan, and mentor to generations.  Arriving at Yale when religious participation was low, he built his classes and services into essential Yale experiences.  He also helped found Yale’s Religious Studies department.

William Sloane Coffin served as Chaplain from 1959 until 1976, and became the model for the college chaplain as public figure and social change activist, at first engaging anti-Semitism at Yale and then taking a leading national role in the Civil Rights movement and the movement against the Vietnam War draft.   Coffin led Yale students in acts of civil disobedience and became a controversial figure. Coffin was a voice of a generation connecting Christianity with social change, and helping open Yale to diversity it had never seen before.

The place of a Protestant campus church changed as Yale changed.   The numbers of Protestant students declined as Yale opened to students of other faiths (and no religious affiliation).  In the ‘70’s and ‘80’s, many faculty and staff moved out of New Haven and joined churches in the suburbs.  The Church of Christ in Yale grew smaller, as did many other college churches around the country. 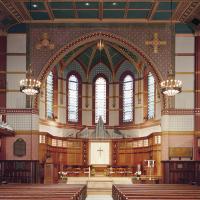 In 2004, a report of the University Council recommended a number of changes to the religious life program on campus, including thoughts about the campus chapel as a denominational church.  In 2005, Yale followed up on the report by disaffiliating from the United Church of Christ (the successor to the Congregational Church), and making the campus church “ecumenical” or non-denominational.   The Church was renamed the “University Church in Yale” and a special focus on student ministry renewed.   The Pastorate of the Church was separated from the University Chaplain’s position and new pastors were hired to serve the church.  A new partnership with the Yale Institute of Sacred Music was created and UCY became a “teaching church” for graduate student choral conductors and organists.   In 2005, the Student Deacons were also re-started, and are now a broad group of undergraduate and graduate student leaders from across the university.